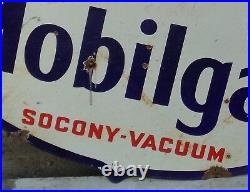 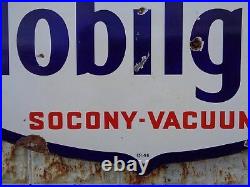 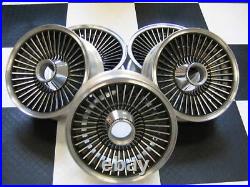 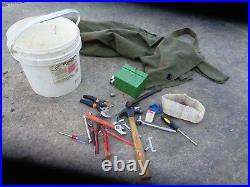 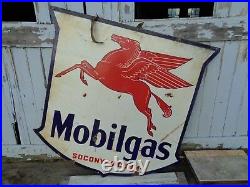 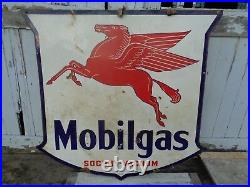 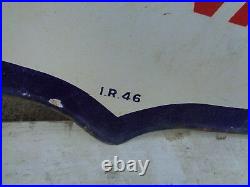 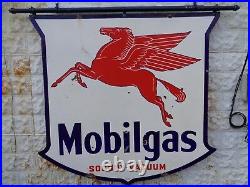 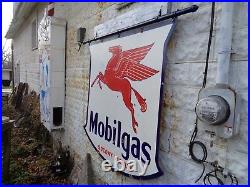 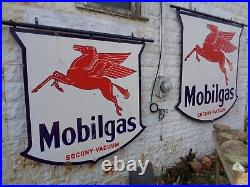 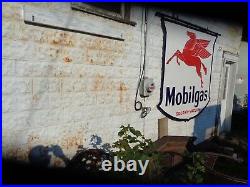 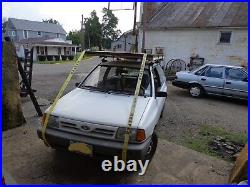 1946 IR 56 Large Mobilgas 2 sided porcelain sign. Stolen right off of our building in August 2015. We were burglarized twice in a 4 day period, while we were present...... We were staked out and cased in person by these "PICKERS" several days before the theft. Several people must have been involved during the theft, likely with a lookout with a cellphone. During the first theft, they stole the sign off the building at dusk. My partner had stepped next door. They were interrupted in the act and fled without their tools. It looks like it's someone with kids? See the little heart shaped box? The second time, in broad daylight, they entered our building through the basement and took another Mobilgas 4' x 8' road approach sign. My partner was going back and forth between buildings and she spotted someone ducking and ran. I was out of town. They knew I was gone because of the vehicles. Things were strewn about our building, tool boxes opened, nothing missing after the second theft. The police didn't bother to get out of their car after the second theft. Over several previous years, other sign and petroliana had disappeared out of and off of our building. Thought it might be kids. They never took anything else those other times, although there was all sorts of other valuable things they could've gotten. We were not collecting, we were outfitting our old general store and garage to a time period.

We were unaware of what we were getting ourselves into...... After filing police reports, we went in search at collector shows that fall. A dealer took great offense and could not help when asked about knowledge of any of those things happening. I had no knowledge that there had been another theft in our area until I met another dealer at the Hershey show in fall about the theft in our area. The police never told me about the previous years theft.

There had been a newspaper article a year earlier about it because the victim had gotten so fed up with the police department who ignored evidence provided to them and did nothing so he went to the newspaper. We left our doors unlocked. We bought hand guns for the first times in our lives.

There is a reason we have a 2nd Amendment. Police are 15 minutes away. The boldness of these thieves means it's likely they are armed..........

This sign is in someone's basement or garage somewhere with probably no knowledge that they have something that was stolen. The photos are clear enough with their particular scars like a fingerprint.

Pay particular attention to the circular crescent shaped scar through the G on the one side, coming through the B, on the opposite side. The bar hanger I made for it, which helped them carry it off, is probably gone, one of the tips was laying in the driveway So look closely at your sign and compare. I want the thieves more than the sign. I met them face to face. It's amazing how it screwed up our lives and our plans.

The expenses of security systems and the insecurity anyway. But being as unlikely as that is, enjoy your stolen sign, who ever and wherever you are.

Description of the perpetrators: About 4 days before the theft, two men came into my garage, asking if I had any use for some old mig welding wire out in the trunk of a dirty, black, late model Chevy sedan, Cobalt? Rear seat back removed, unusual mag wheels. I was distracted by the older individual, went out to the car.

He was about 5'9 average build, 50's, no facial hair or glasses, while the younger male, 20's, walked around the yard. He was a large, younger person, with dark hair, mushy body, no facial hair or glasses, baseball cap, talkative and was distracting me, asking dumb questions about the stuff I had in the yard. They were a nuisance and I went back in the building. They took a long time looking at the sign after I went back inside. It never dawned on me what they were up to. I have added a photo of wheels that are very much like the wheels on the car, like the wheels for the Stingray Corvettes of the'60's. Missing from one theft a couple years previous: Several oval, squished, return angle green porcelain sign lights, 3? A Mobilgas maintenance record file box in nice shape with a few cards in it. An oval porcelain AAA sign. A tin bluish Raybestos sign, about 24" x 36"?

Something like Mobilgas Ahead or Just Ahead painted on right side of sign? A black, wooden, ogee, reverse ogee trim border. Some white drips of paint.... Taken off of other building. You may think I was careless? I was going back and forth and living in Cleveland for years. I could not keep a handle on this stuff. I was getting burglarized up there for normal stuff too. The item "IR46 56 Large Mobilgas 2 sided porcelain sign STOLEN 2 YEARS AGO" is in sale since Friday, December 29, 2017.

This item is in the category "Collectibles\Advertising\Gas & Oil\Gas & Oil Companies\Mobil". The seller is "302a" and is located in Rockbridge, Ohio.

This item can't be shipped, the buyer must pick up the item.